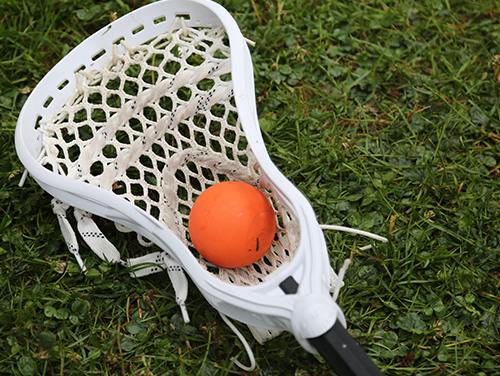 Siblings are an enigma. Living and growing up together, continually competing and driving each other crazy at times. It does not get much easier when identical twins are involved. For the Lassows and Sweeneys, it is hard to imagine one without the other. All seniors at Franklin Pierce, Benjamin and Aaron Lassow have been vital cogs for the men’s lacrosse program, while Caitlin and Briana Sweeney have brought new life into the women’s lacrosse program, shouldering the team for the better portion of their collegiate careers.

The Lassows and Sweeneys are similar. Both are identical twins, both have played sports with each other their entire lives, and both opted to come to Franklin Pierce to play lacrosse. Despite growing up in two different states, there are parallels in the paths both sets of twins took to Rindge.

The Lassows grew up in Connecticut playing a variety of sports together and competing in just about everything. “There wasn’t one thing we wouldn’t compete at,” said Aaron Lassow. “We would see who could eat dinner the fastest, and when I was on defense I’d want to take him on.” The constant competition was a factor for both brothers, as Aaron and Ben wanted to play lacrosse, but neither wanted to go to the same show. Ben would commit to Franklin Pierce, with Aaron following just a few months later. “We wanted a break from each other,” said Aaron. But, in spite of wanting that individuality, both brothers would attend Franklin Pierce in the fall of 2014, and they were not the best of friends during their freshman year.

The bitterness was short-lived, as it usually is when siblings clash. The “rivalry”, if there ever was one, quickly died in college, as both brothers realized playing sports together was nothing new to them. Both brothers were able to find themselves, and despite playing on the same team and attending the same school, they managed to go on their own paths, with Aaron studying criminal justice and Ben majoring in health sciences. On the field, Ben grew into a regular in terms of playing time, while Aaron embraced more of a supporting role. For the Lassows, there is contentment with how it played out. “He’s a better player; I wouldn’t change it,” said Aaron, behind a bit of a smile. The admiration for his brother was evident when Ben was named one of the captains for the 2017-18 season, their last one together. “After I found out I was captain, he was one of the first to embrace me and congratulate me,” said Ben. “He’s in my corner.”

With their final season in the books, the Lassow brothers ended their four years here in very different ways. Ben played in 55 games, scoring 64 points, including 58 goals. Aaron has been limited to just 24 games through four years, after having suffered an injury along the way. Ben’s 64 points and Aaron’s five leave the duo with 69 points over 79 career games, a respectable number to sum up a career which leaves both brothers happy and proud. “It’s been a long, tough road,” said Aaron. “But, I’m done and have accepted it.”

While the Lassow brothers at first wanted to part ways, for the Sweeney sisters it was the exact opposite. While their initial plan was to go to different schools, the Sweeneys quickly realized going to the same university would help both as they left home and their family. “I think there have been more times than I can count that I've sat and reflected on how thankful I am that we decided on going to the same school,” said Briana. “As athletes here, we had the opportunity to play together at a competitive level and I can't imagine doing it without my sister.”

Both Briana and Caitlin came to Franklin Pierce with the eagerness to continue their playing careers together, while the women’s lacrosse program eagerly embraced the twins’ dynamic scoring and playmaking. In hindsight, one might think it a blessing both decided not to part ways. The duo did plenty of re-writing to the program’s history, as they combined for 468 points. The final total was 254 for Caitlin and 214 for Briana, which was good enough for second and fourth, respectively, all-time in points scored in program history. In the process, the sisters became the third and fourth players to enter the program’s 200-point club.

The reason for their success? Chemistry. Twins often are associated with having that “twin connection,” and perhaps no duo shows that better on an athletic field than the Sweeneys. “The chemistry comes naturally on and off the field,” said Caitlin. Brianna was more detailed: “Playing with someone that you have a bond with off the field definitely reflects during play. I think after playing sports together our whole life, it just becomes natural to work off each other's tendencies.” Natural it may be, as it seems the two never missed a beat during their four years at Pierce.

While on the field everything looks smooth, off the field there is a sibling competitiveness, much like with the Lassows. While the Sweeneys would not call it a rivalry, the ability to drive each other is definitely there. “I don't think there has ever been a rivalry. I think seeing each other work hard and succeed has been the biggest motivator,” said Briana. Caitlin backed her sister by adding, “I wouldn’t call it a rivalry, but she was always there to push me.”

While there might not be an actual rivalry, the motivation and support that exists between two siblings, identical twins or not, is something that is present. Sibling relationships are complicated and can be downright weird at times. There’s a flush of emotions and yet through all the years of living together, and all the years of competition, the Lassows and the Sweeneys have stuck through it all, not only as teammates, but as brothers and sisters too.