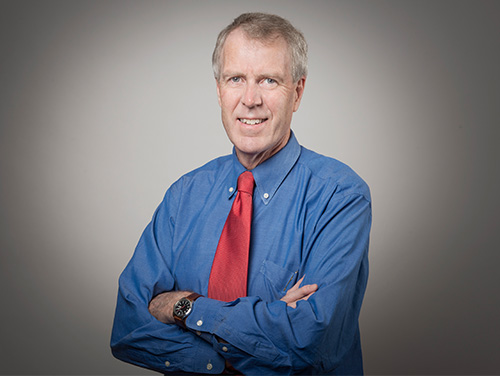 The annual Marlin Fitzwater Center Honors Medallion Lecture will take place at Franklin Pierce University’s Rindge campus on Thursday, April 18 at 3:30 p.m. in Spagnuolo Hall. Fitzwater Visiting Fellow and honoree Richard T. Griffiths, president of the Georgia First Amendment Foundation and retired Vice-President and Senior Editorial Director for CNN, will deliver the public Medallion Lecture, entitled The Global Battle for Journalism’s Soul. The Fitzwater Honors ceremony will follow at 6 p.m., when Fitzwater Medallions will be presented to select students, alumni and journalism educators. Both events are open to the public.

“For 17 years, The Marlin Fitzwater Center for Communication has dedicated its resources to educating our students in public communication, from the town hall to the nation’s Capitol,” said Dr. Kristen Nevious, Director of the Fitzwater Center. “The robust debate that is at the core of our nation’s democracy does not just happen. It requires commitment. The Medallions are presented annually to those who have demonstrated a commitment to an electorate fluent in the issues of their time, and who have dedicated their lives to serving our democracy at its very core.”

The 2019 Fitzwater Honorees include:

• Richard T. Griffiths will receive the Fitzwater Medallion for Leadership in Public Communication

• Robert M. Patterson ’69 will receive the Fitzwater Medallion for Leadership in Public Communication, by an alumnus

• Luke Tracy ’19 will receive the Fitzwater Medallion for Contributions to the Public Discourse, by a graduating senior

• Sarah Daley ’19 will receive the Fitzwater Medallion for Academic Excellence, by a graduating Fitzwater Scholar

Since his retirement from CNN in 2017, Richard T. Griffiths remains deeply engaged on issues of government access and free speech. He has taught journalism ethics, investigative reporting and editorial management in top journalism institutions in the United States and around the world.
Griffiths’ responsibility at CNN included oversight of investigative journalism and the network’s fact-checking operations during the 2008, 2012 and 2016 presidential elections. He also led the CNN team that investigated the 9/11 attacks, for which the team won a National Headliner award. Over his career, Griffith’s work has been recognized with two Emmys, five Peabody awards, and two Investigative Reporters and Editors medals.

Since his retirement, Griffiths has crafted art pieces designed to give historical context to the current tensions between politicians and independent journalism. One of his sculptures, a hanging mobile called “No Obstruction to Free Speech,” displays quotes from every U.S. president, as well as from Founding Fathers and Supreme Court justices, illustrating how America’s leaders have respected the ways independent journalism and free expression contribute to the stability of our democracy.
The mobile will be on display in the DiPietro Library on the Rindge campus from Tuesday, April 16 through Thursday, April 18, and the public is invited to visit from 8 a.m. to 7 p.m.