Preview Screening of Ken Burns’s The Roosevelts: An Intimate History at Franklin Pierce 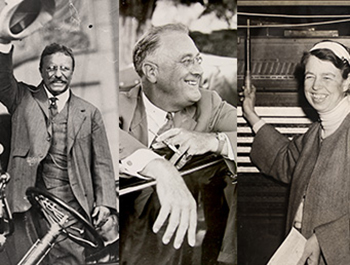 The Marlin Fitzwater Center for Communication and the Honors Program at Franklin Pierce University will co-host a preview screening of Ken Burns’s  The Roosevelts: An Intimate History,  September 8, 6:30-8:00 p.m. in Spagnuolo Hall. The screening will be followed by a discussion with Pam Tubridy Baucom and Daniel J. White, producer and associate producer of this Florentine Films seven-part, fourteen-hour series, which will premiere on New Hampshire Public Television and PBS on September 14. This event is free and open to the public and was made possible by NHPTV; reserved seating is recommended.

The Roosevelts: An Intimate History  takes a close look at one of the most influential families in American history. The film series interweaves the stories of three powerful Roosevelts: Theodore, Eleanor, and Franklin. These three individuals not only redefined the relationship Americans had with their government and with each other, but also redefined the role of the United States within the wider world. The series encompasses important turning points in the history that the Roosevelts helped to shape, while also providing insight into their family relationships and personal triumphs.

The post-screening discussion and Q&A will allow for inquiry into the historical information presented, as well as about the creation of the film series. White, the editor and associate producer of  The Roosevelts,  was responsible during the film’s production for research and acquisition of archival footage. He is currently the post-production coordinator and assistant editor for  The Vietnam War  (2017). Baucom is one of three producers on  The Roosevelts.  She has been an assistant to Ken Burns, as well as the coordinating producer on a number of award-winning Florentine Films productions. Dr. Doug Challenger, Coordinator of the Documentary Studies Certificate Program and Professor of Sociology at Franklin Pierce, will serve as moderator for the discussion.