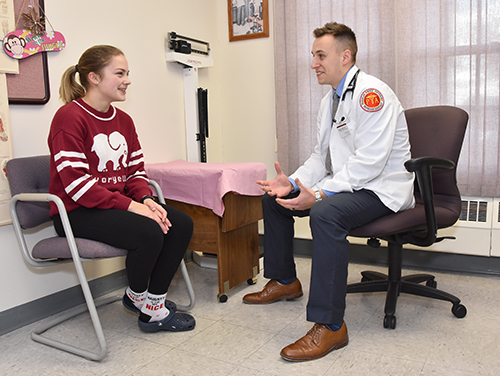 Russell Arpin ’16, MPAS ’19 has made the most of his Franklin Pierce experience at every step along his way, and now finds himself at the threshold of a fulfilling future in primary care medicine. He recently completed the last of nine clinical rotations for his Master of Physician Assistant Studies (MPAS) degree, which have included internal medicine at WakeMed Hospital in Raleigh, NC and OB/GYN at Monadnock Community Hospital in Peterborough, NH. His final rotation brought him back to the Rindge campus, as a staff member in the Health Services Department of Franklin Pierce University.

“It felt like déjà vu at first,” Arpin said, “driving the same route I used to take, studying in the same nook in the library. But I enjoyed talking to the students, especially those who are also interested in Health Sciences.”

Arpin has found his path with the help of family, friends and faculty members at Franklin Pierce, all of whom he believes have been “strategically” placed in his life by God. Growing up in New Ipswich, NH, Arpin says he was unmotivated in high school because he couldn’t see the bigger picture. When he met his (now) wife Erica, he knew he needed a plan to make a future together, and relied on his faith to find it.

Arpin’s older brother Ben, now a practicing Physician Assistant himself, graduated from Franklin Pierce in 2013 after his service in the Navy, and found a solid mentor in Health Sciences professor Thomas Bennett. Inspired by his brother, Russell Arpin entered Franklin Pierce as a commuter his sophomore year, and quickly found Professor Bennett to be the same kind of challenging mentor and guide, helping him to evaluate the myriad paths available to becoming a healthcare provider.

Arpin found another unexpected supporter in Bob Smith, owner of the local business Monadnock Security Systems, a good friend of Erica’s family. Smith provided Arpin with the part-time job that made it possible to attend Franklin Pierce, and when he discovered Arpin’s interest in becoming a Physician Assistant, he went the extra mile. He arranged for Arpin to job-shadow with his daughter, who is a Physician Assistant in Texas, and paid for the weeklong experience. Arpin believes that experience made a crucial difference in his application to the highly competitive MPAS program at Franklin Pierce.

MPAS faculty member Amy Klingler believes Arpin has every quality a patient would want in a healthcare provider. “He’s smart, kind, funny and empathetic. I would trust him with my care and I have extremely high standards! He hopes to work in rural New Hampshire which is part of our mission – to help fill the need for providers in rural areas.”

Russ is proud to be a Franklin Pierce alumnus, and is proud of the school’s foresight and commitment to advanced study in health sciences. “For a small school in the woods of New Hampshire to be on the front lines of the medical profession with outstanding programs in both Physical Therapy and Physician Assistant Studies is impressive.”