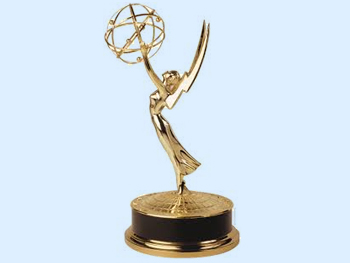 The New England chapter of the National Academy of Television Arts & Sciences, which produces the region’s Emmy awards each year, has announced the 2015 Student Award for Excellence, often referred to as the ‘Student Emmys.’

This year Franklin Pierce University swept the Public Service Announcement category (PSA), taking home top honors as well as both runner-up spots.  Students Carlo Falitico and Lauren Caduto ’16, (and faculty advisor, Kristen Nevious), won the “Emmy” in the PSA category with their video entitled “Can Collaboration.”  The trio also took home both runner-up videos, giving the Ravens a clean sweep of the category.

Ms. Caduto, who double majors in both English and Education, is also editor-in-chief of the Pierce Arrow, the student newspaper of Franklin Pierce, and editor of the student literary journal Nevermore.

Mr. Falitico, who is a Mass Communications major at the Marlin Fitzwater Center for Communications at Franklin Pierce, has Emmys in his genes, as his grandfather, Bill Seamans, a former producer and Chief Correspondent for ABC and CBS news for nearly four decades, won an Emmy in 1988.  “The award sits on the family mantle and has been an inspiration to Carlo since he was young,” said Laura Seamans, Carlo’s mother and an employee at Franklin Pierce.

“I would like to thank Dr. Kristen Nevious for the opportunity to demonstrate what I’ve learned from the Mass Communications department,” said Falitico. “I look at this as the first stepping stone towards a successful career in Media Productions."

Caduto also appreciated the experience of competing. “I am very grateful for the opportunity to create and leave a mark on the Franklin Pierce campus. As an English and Secondary Education major, I can attest that the Fitzwater Center has something to offer to students of any major. It allowed me to explore many options in putting my English degree to use. It’s very gratifying to hear that these messages have had such a positive effect on the community.”

The students will receive their “Student Emmys” at the 38th annual Boston/New England Emmy Awards Ceremony, a black tie event that will take place at the Marriott Boston at Copley Place on May 30, 2015.