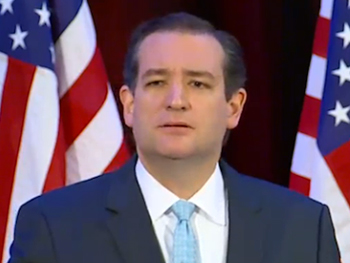 U.S. Senator Ted Cruz (R) will visit Franklin Pierce University, Friday, May 29, 2015.  Cruz, the junior senator from Texas, is scheduled to talk with students, faculty, and the local community in a Town Hall-like event that will be held from 7 to 9 pm in Spagnuolo Hall on the Rindge campus. The event is free and open to the public.

“We are pleased to be welcoming Senator Cruz to Franklin Pierce,” said Dr. Kristen Nevious, director of the Marlin Fitzwater Center for Communications at Franklin Pierce University, which is hosting the Cruz visit.  “The Fitzwater Center is proud to be a prominent stop on the road to the White House.  We look forward to welcoming candidates from both the Republican and Democratic parties, as we bring forth the robust debate that is critical to the health of our nation's democracy and of vital interest to the Monadnock region.”

Cruz is the third prominent Republican, but the first official 2016 Presidential candidate to visit the Franklin Pierce campus in the past few weeks.  Former Gov. George Pataki (R) spoke to the campus on May 5 and Congressman Peter King (R) presented to the campus on April 17.  Both of those men are rumored to be contemplating a run for presidency in 2016.