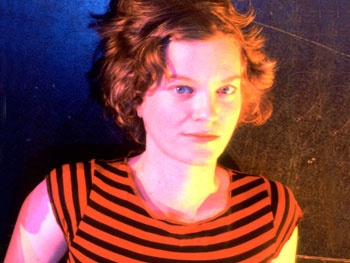 The Department of Theatre Arts and Dance at Franklin Pierce University welcomes three visiting guest artists to the Rindge campus: Jenny Fulton, Paul Besaw, and Selene Colburn (pictured in photo), all of whom will be involved in productions during this academic year.

Professor Fulton has 17 years of experience in the performing arts, designing space, objects, and clothes for stage and film. She has taught costume and set design for seven years at the college level and has a Master of Fine Arts degree in design from Yale University School of Drama. “I am excited to be collaborating with the theater department at Franklin Pierce,” says Professor Fulton, who will teach the course “Dressing the Part: Intro to Costume Design and Construction” in the spring.

Professor Fulton will design costumes for the play Mr. Marmalade (Oct. 30-Nov. 2) and for the winter dance concert. “The designs of Jenny’s that I’ve seen at Keene State and at Northern State have been very imaginative,” says Nancy Stone, Professor of Theatre Arts and director of Mr. Marmalade. “I’m looking forward to working with her.”

An associate professor of dance at the University of Vermont, Professor Besaw teaches modern dance technique, choreography, and dance history. His primary interest lies in developing original dance/theater; his work has been seen throughout the U.S. Professor Besaw will direct and perform in Momma at the Gate (Nov. 16), a new, nonlinear work that weaves together stories of women, war, loss, and survival.

Professor Colburn is a choreographer, writer, activist, and librarian. She is an assistant library professor at the University of Vermont, with a secondary appointment in the Department of Music and Dance, where her teaching, like her work, focuses on the intersections of research and performance. Professor Colburn is choreographing Potboilers (Nov. 16), new dance theater works, in a double bill with Momma at the Gate.

Other productions at Franklin Pierce this fall include A Night of Stars (Nov. 8-9), an evening of cabaret directed by Michael Tyrone Brown II ’12, and What’s That You Tried to Say? (Dec. 5-7), a meditation on the shorter works of Samuel Beckett, designed by Assistant Professor Mark O’Maley.