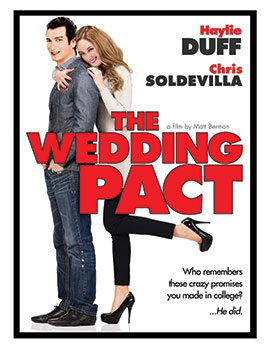 Franklin Pierce University will host a film screening of The Wedding Pact on Monday, April 7 at 8:30 p.m. in Spagnuolo Hall. A Q&A will follow the screening with the film’s director, Matt Berman ’92; the executive producer, John Perry ’92; and Scott Michael Campbell, who is an actor in the film. Light refreshments will be provided; this event is free and open to the general public. Parking is free and readily available on campus.

Executive Producer John Perry, who received his Bachelor of Arts degree in Mass Communication at Franklin Pierce in 1992, currently works for Paramount Pictures in Hollywood. He directed and produced the Dr. Phil show for many years; prior to that, Perry worked on the Oprah and Leezashows. Director and screenwriter Matt Berman, who was also a Mass Communication major and classmate of Perry’s at Franklin Pierce, is known for his work on Hollywood and Wine, and Big Wind on Campus. Actor Scott Michael Campbell is best known for Brokeback Mountain, Push, and Flight of the Phoenix.

The Wedding Pact also stars Haylie Duff, Chris Soldevilla, and Angie Everhart. A trailer of The Wedding Pact may be found here: http://www.imdb.com/video/screenplay/vi3697846297.