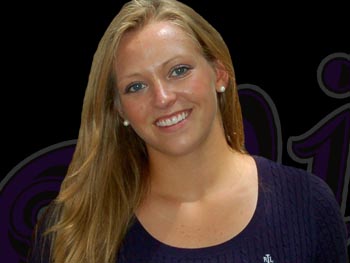 Recent Franklin Pierce graduate, Mandi Adee '16 (Kinderhook, NY) is looking to make her mark in the world of professional baseball after becoming only the 5th female general manager in the professional sports world.

Adee was hired in March as general manager of the New Hampshire Wild, a professional baseball team in its inaugural season in the newly formed Empire League. Adee, who is currently in the process of completing her MBA in Leadership from Franklin Pierce University, was a standout softball player as an undergraduate at Pierce. She ranks 11th all-time in wins (11), 11th in total appearances (51), and 11th all-time in strikeouts (111) and 7th in complete games (14) in her  career at Franklin Pierce. Additionally, she received the Scholar Athlete Award consecutively from 2012 to 2015,  was on the Dean’s List all four years of her collegiate career and became a member of the Sigma Beta Delta Honor Society in 2014.

Adee has worked as an assistant coach and head coach for the Nike MBSC organization the last three years. Along with coaching at MB Sports Camps at Curry College, she also coaches local Tee Ball and participates in community programs through National Honor Society.

“I am very excited that I have been given this opportunity,” said Adee. “ I look forward to learning more about the sports industry while working with the Wild and the Monadnock region to make this a fun experience for everyone and to also connect the team with the community.”

Adee, joins an exclusive group of only four other female general managers in professional sports, and at the age of 22 is the youngest general manger in professional sports. The first female GM was Lanny Moss of the independent minor league Portland Mavericks who was hired back in 1974. The independent Atlantic League has had two female GM’s in Lindsay Rosenberg of the Camden Riversharks  and Kristen Simon of the Lancaster Barnstormers. In the ranks of affiliated minor-league baseball, Shari Massengill served as the general manager of the Kinston Indians, a member of the Class-A Advanced Carolina League from 2005-2010.

Adee takes the helm of a New Hampshire Wild team coached by former minor leaguer Jerry Gonzalez.  The Wild are set for a 60 game schedule, with thirty home games at Dr. Arthur and Martha Pappas Field on the campus of Franklin Pierce University.

The New Hampshire Wild are one of only four teams in the Empire League, and the only professional sports team in the town of Rindge, NH. The team returns home this Friday, June 17th, when they take on the Sullivan Explorers at 6:30pm. The series is the beginning of a nine-game home stand running through June 24th.

Before departing for a 13 game road trip, Adee says that the team is planning on volunteering time at the Community Kitchen, which is a non-profit soup kitchen and food pantry in Keene that has served the Monadnock region since 1983. The team will be taking down an old shed and doing landscaping for the Community Kitchen.