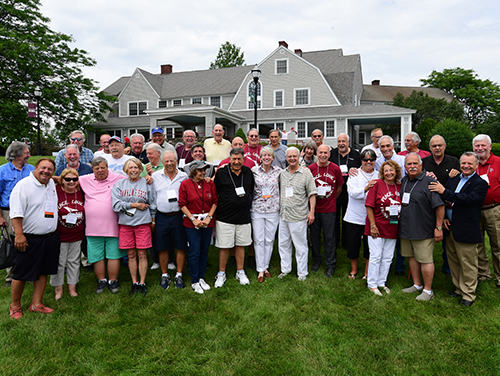 Over 300 alumni and their guests returned to campus to reconnect with lifelong friends at Alumni Reunion Weekend June 28-29. The Class of 1969 celebrated their 50th reunion, and received a special 50th medallion and a yearbook that was a nostalgic journey for class members.

Reunion Weekend kicked off with a reception for the Pioneer Classes of 1966-1974. This special event was graciously hosted by Carleen ’71 and Dan Farrell, and was a great opportunity for the pioneer classes to reconnect and reminisce.

Friday night arrivals were welcomed back to campus with a Dessert & Dancing Party and a spectacular fireworks display. On Saturday morning, we remembered alumni lost in the last year. Donald Pyke ’81, a dedicated supporter of Franklin Pierce and the greater Rindge community, was honored with an inscription of his name on the Alumni Memorial Stone.

President Kim Mooney ’83 presented a State of the University Address sharing many accomplishments of the University over the last year, including our recent reaccreditation by the New England Commission of Higher Education (NECHE) for both the New Hampshire and Arizona campuses. She also shared plans for the realignment of our undergraduate and graduate programs through a visionary launch of three new colleges (the Colleges of Business, Health and Natural Sciences, and Liberal Arts and Social Sciences), and two new schools (Schools of Education and Nursing).

Alumni had a chance to participate in our University archives project by sharing oral histories. The Class of 1969 had a special afternoon session where they reunited as a group and shared stories from their time at Pierce.

Saturday afternoon was filled with activities at the waterfront including swimming, sail boat, and beach volleyball games, and ended with cold treats from Nick & Ants ice cream truck.

The entertainment highlight of the weekend, the Back to the Garden 1969 Tribute Band, did not disappoint, with music, story-telling and a photo and video backdrop bringing everyone back to 1969.

A special thank you to the Class of 1969, who kicked-off a new tradition with the 50th Reunion Gift Campaign, and gave more than $78,000 to serve as seed funding to revitalize the Emily Flint Student Center. They are drawing close to their reunion year goal of $100,000, and are asking classmates to join them in reaching their goal.