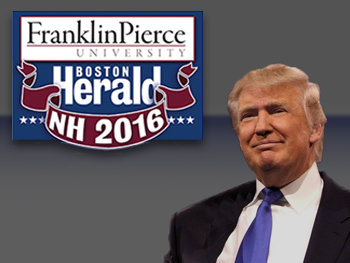 RINDGE, NH (August 11, 2015)- Franklin Pierce University and the Boston Herald released the second in its series of Presidential Polls leading up to the 2016 New Hampshire primary, which historically has been a key indicator in national elections due to its "First in the Nation" position. The release of the Franklin Pierce/Boston Herald Poll took place at 11 am, Tuesday, during a live broadcast on Boston Herald radio, WMEX 1510 AM and WCRN 830 AM.

The Franklin Pierce/Boston Herald poll revealed some significant changes amongst the field of candidates in the aftermath of last week's GOP debate in Cleveland. While there is no clear front-runner in the race, results indicate Donald Trump (19%) appears to hold a very slim lead over former Florida Governor Jeb Bush (13%) and Ohio Governor John Kasich (12%). Texas Senator Ted Cruz (10%) and businesswoman Carly Fiorina (9%) also show up strongly in the poll.

Losing ground in the most recent poll were Wisconsin Governor Scott Walker (down 11%), Kentucky Senator Rand Paul and New Jersey Governor Chris Christie who were also both down by seven percentage points.

Governor Kasich and Carly Fiorina are the big winners in the most recent poll. Governor Kasich gained 11 percentage points the last poll in March, surging from one percent to 12 percent. Meanwhile, his favorability ratings are up from 24 percent in March to 50 percent in today’s poll.

After what most considered a very strong debate performance last week in the early debate, Carly Fiorina, former chief executive of Hewlett Packard, made a big jump moving from less than a percentage point to nine percent and a strong fifth place showing. Additionally, Fiorina also scored high on the favorability ratings, with 57 percent of respondents viewing her favorably and only 12 percent viewing her unfavorably.

While Donald Trump’s numbers have risen sharply, Gov. Jeb Bush remained the most likely candidate to win the Republican presidential nomination with a 27%-16% lead over Trump.

The poll points to the race being far from over, with three out of four republican voters indicating they could change their minds:

… the results suggest that the Republican presidential primary looks to be very competitive. At this early stage of the contest, or course, the electorate remains highly fluid. Three fourths of likely Republican primary voters report that they could change their mind (76%) between now and the election. Only twenty-three percent of Republican primary voters report that they have made a firm choice of who they intend to vote for in the primary. As shown above, at this point in time, support for almost all of the candidates under investigation is subject to change between now and the time of the primary early next year.

Franklin Pierce University President Andy Card, who served in the White House for three different U.S. presidents, and is best known for being chief of staff to President George W. Bush, also reveals the importance of this most recent poll.

"While we are still many months away from our first in the nation primary, this poll shows that people are tuning into this election and specifically New Hampshire," says Card. "Additionally, the candidates are quickly learning what issues move the voters of the Granite State."

Dr. Kristen Nevious, Director of the Marlin Fitzwater Center for Communication, was pleased with the attention that Granite State voters have been paying to the field of candidates as well as the role Franklin Pierce Students have had the opportunity to play during the process thus far.

"Today's poll results impressively illustrate the dynamics of the American Presidential Election cycle.  It is clear that New Hampshire's voters were actively engaged in the debates that aired on FOX and played out in the media in the days that followed," says Nevious. "The real winners in today's poll are the students of Franklin Pierce University.  Our collaboration with the Boston Herald is giving them an unparalleled education in the Democratic process."

The poll was conducted August 7-10, 2015, by well known political pollster Kelly Myers, president of RKM Communication and a Fellow at the university’s Marlin Fitzwater Center for Communications. The survey is based on a sample of 414 likely Republican presidential primary voters in New Hampshire. The margin of error is +/- 4.8 percent.

Franklin Pierce and the Boston Herald will release a second poll tomorrow morning that focuses exclusively on Democratic candidates. Once again Boston Herald Radio will be the first to broadcast the results.

Visit the Polling Center for the full report.