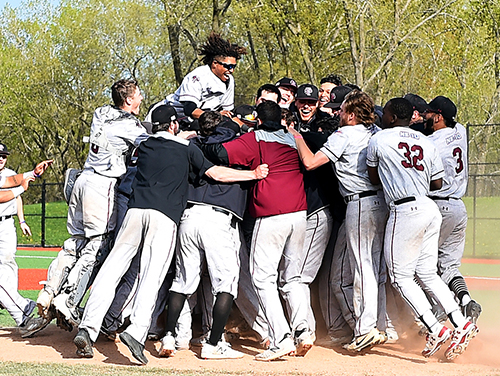 Graduate student right-hander Ryan Covelle (Medford, Mass.), graduate student right-hander Anthony Matarazzo (Medford, Mass.), senior left-hander Evan Glew (North Andover, Mass.) and senior right-hander Zach Hart (Wallingford, Conn.) combined to author a nine-hit shutout on Saturday afternoon, as the Franklin Pierce University baseball team claimed its league record sixth Northeast-10 Conference title. Two runs in the first were all the Ravens needed on the way to a 3-0 win over Merrimack to finish off their climb out of the loser's bracket to the NE10 crown. Hart picked up his second save of the day to nail down the final game of the Northeast-10 Championship, hosted by Le Moyne at Onondaga Baseball Complex.

Hart was named the tournament's Most Outstanding Player at the conclusion of play. He was joined on the All-Championship team by junior right-hander Derek Duffy (Farmington, Conn.) and freshman center fielder Joel Lara (Boston, Mass.).

Franklin Pierce has earned the NE10's automatic berth into the NCAA Championship, which will begin next week with the East Regional. The Ravens will find out their seed and where they will be headed on Sunday night, when the selection show airs on ncaa.com at 10 p.m. Merrimack still has a shot at an at-large bid, but will have to wait for the selection show to find out if its season will continue.

Franklin Pierce opened the scoring with two runs in the top of the first inning, and it would be all the Ravens needed in the winner-take-all title game. Lara opened the game with a double down the left-field line, before a single by junior catcher Dylan Jones (Palm Beach Gardens, Fla.) and a sacrifice bunt put the runners at second and third with one away. Junior right fielder John Mead (Washington Township, N.J.) – who had five hits between the day's two games – provided the opening salvo, with an RBI single to center field to score Lara. Senior designated hitter Ural Forbes (Freeport, Bahamas) followed with a sacrifice fly to center field to double the lead to 2-0.

The score would remain stuck at 2-0 until the top of the seventh inning, when the Ravens tacked on an insurance run. Freshman third baseman Jethro Hurt (New York, N.Y.) led off with a single to center, moved to second on a single by junior first baseman Jonel Ozuna (New York, N.Y.) and went to third on a double-play ball. Freshman shortstop Zach Landry (Mashpee, Mass.) then cashed in the run with a two-out single to right field to create what would stand as the 3-0 final.

Meanwhile, the Franklin Pierce pitching staff was busy holding Merrimack scoreless in the title game. Covelle (7-5) got things started on just one day of rest with four scoreless innings. He allowed two hits, hit two batters and struck out three. Matarazzo scattered four hits over the next two innings with a trio of strikeouts as well. Glew put together two scoreless innings with three hits and four strikeouts before Hart came on to nail down his second save of the day (and his third of the tournament). Hart got all three outs in the ninth, including back-to-back strikeouts to end things and send the Ravens spilling out of the first-base dugout in celebration.

Merrimack's best chance came in the bottom of the sixth inning against Matarazzo, when the Warriors loaded the bases with nobody out on a trio of singles. Matarazzo was able to bear down from there though. He got freshman left fielder Michael Golankiewicz to bounce back to the mound for a fielder's choice which erased a runner at the plate. Matarazzo then notched back-to-back strikeouts of sophomore right fielder Thomas Crowley and freshman catcher Kurtis Stadnicki to strand the bases full of Warriors.

Merrimack would also load the bases in the seventh, but did so with two outs this time, and came up empty again. The Warriors would not seriously threaten to turn the tide of the game in the eighth or ninth innings.

Merrimack gave the ball to senior right-hander Cam Monagle (7-1), who probably deserved better from what could stand as his final collegiate start. He went the distance in defeat on just 103 pitches (81 strikes), allowed three runs on 10 hits, did not issue a walk and struck out six.