Andrew Card Announces He is Stepping Down as Franklin Pierce President 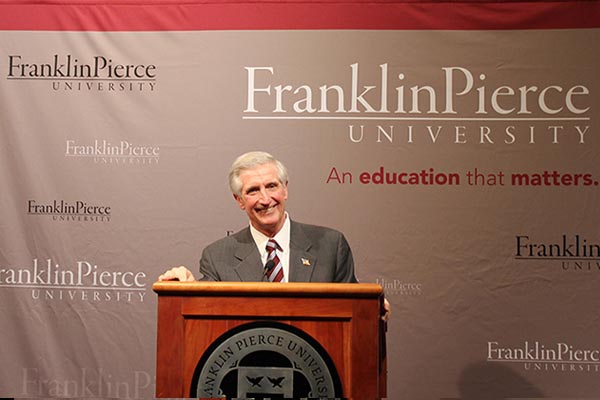 Andrew Card announced today that he will step down as president of Franklin Pierce University on August 1 because “I had a two-year agreement with the board that will be up in January. I have surpassed the goals even I laid out for myself. I wanted the school to start with my successor in place prior to the new academic year beginning so they can take the school to the next level.

“Leading this institution has been both a good challenge and a great joy. I leave knowing we have met those challenges and I know the school is on a firm foundation for growth,” Card said.

Michael C. J. Fallon, chairman of Franklin Pierce’s board of trustees said, “Andy accomplished everything we asked of him, and more. We are sorry to see Andy and his wife, Kathleene, leave. Both have made lasting contributions to this institution while inspiring students, staff, faculty and alumni. Thanks to Andy, Franklin Pierce is measurably better positioned for its future than when he arrived.

“We will always appreciate the experience and enthusiasm he brought to Franklin Pierce and the extraordinary achievements while he was here,” Fallon said.

• Undergraduate recruitment and retention are on a track to reach historic levels this year, with demand from freshman applications requiring a waiting list

• Undergraduate registrations and revenue projections exceed even the most optimistic forecasts

• For the second straight year, the university had an operating financial surplus

• The university’s visibility nationwide has been significantly increased

Card, a native of Holbrook, Mass., came to Franklin Pierce after having served as chief of staff to President George W. Bush and acting dean of the George H.W. Bush School of Public Service and Government at Texas A&M University. He was secretary of transportation in President George H. W. Bush’s administration. He had served on the Franklin Pierce board of trustees from 1996 to 2000.

“I fell in love with this school and its mission when I served on the board,” Card said. “That love has only deepened during my service in the presidency. I have truly enjoyed getting to know the people who make this university a success and especially the outstanding students. I will miss them most of all.”