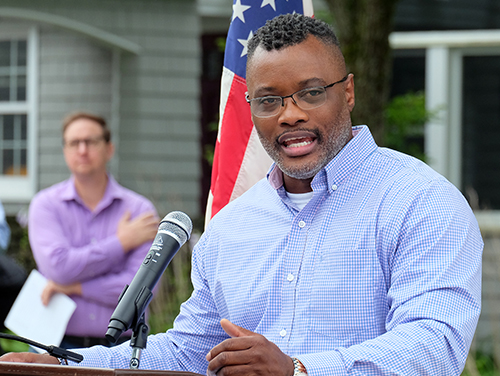 More than 50 students, faculty, and staff gathered at the DiPietro Library Courtyard for “Readings in Democracy” in which members of the community read excerpts from the Constitution and other founding documents, as well as from the writings of prominent citizens and institutions. “It is our hope that you will reflect on their words and consider how you might fulfill your responsibilities as a citizen of the world, of the United States, and of Raven Nation,” said Dr. Kristen Nevious, Director of the Marlin Fitzwater Center for Communications.

Leading the readings was President Kim Mooney ’83 who recited the preamble to the Constitution before handing the podium over to other speakers, including Pierre Morton, Chief Diversity Officer, who shared his own work entitled “Say My Name: A Poem to the Walking Dead.” His impassioned delivery called out the numerous, senseless assaults and murders of young, Black people. “You stamped out my life with the bending of your knee across my neck, while I was in handcuffs, in broad daylight for all the world to see (George Floyd, 2020),” proclaimed Morton. “It is time that you see who I am!”

In Spagnulo Hall, Andru Volinsky gave his first lecture as FPU’s civic scholar-in-residence. The presentation, titled “Can the Constitution(s) Save America?” was livestreamed to the public and students at Plymouth State University, in addition to being attended to by a standing room only crowd. The talk focused on state funding for public K-12 education and highlighted Volinsky’s work as the lead lawyer in the 1997 Claremont School Funding cases that established the right to an adequate state-funded public education in New Hampshire.

Associate Professor of Political Science Frank Cohen, Ph.D. presented “A Peaceful Transfer of Power: Dateline January 6, 2021” in the Patterson Television Studio. He was flanked by front pages from around the world that harkened back to that day earlier this year when protestors stormed the Capitol Building as he discussed how and why the most recent presidential election results were contested by some.

Additional Constitution Day programming included a special screening of the late Professor Doug Ley’s compelling “Readings in Democracy” from the University’s 2019 Constitution Day, $100 Plus Mileage podcast tapings, and distribution of free copies of The Constitution of the United States of America by the DiPietro Library.