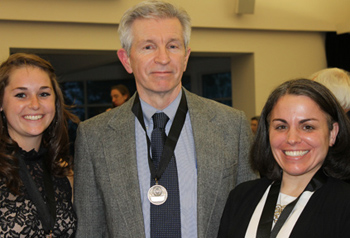 Conval high school teacher Tim Clark was recognized for his contributions as a New Hampshire high school media advisor. In his acceptance remarks, Clark said “Writing has made me a better teacher…,” describing himself as a “writer who teaches journalism.” Erica Tomaszewski received the Medallion awarded to a graduating senior, for outstanding achievements during her four years at FPU. “When you speak out with passion, you can truly change the world,” Tomaszewski stated in a stirring acceptance speech.

Dr. Kate Marro was awarded the Medallion for Leadership in Public Communication by an alumnus, in recognition of her dissertation on elderly sexual abuse, which led to changes in the state of Maine’s legislation. Marro, who received her Doctor of Arts in Leadership at FPU in 2011, helped bring national attention to this important issue. The Alumni award is designed to honor alumni of the University who have demonstrated, through their professional and personal lives, a strong commitment to an issue, whether at the local or national level.

Tom Rosentiel—author, journalist, press critic, and founder and director of the Project for Excellence in Journalism—was honored with the Leadership in Public Communication Medallion and will be on campus to receive the award on September 10, 2012, in a separate event. Seven graduating students (Heather Brown, Brittany Cibotti, Laurie Graham, Stephanie Lewis, Amanda Panaro, Alex Terrill, and Erica Tomaszewski) were also awarded Medallions in recognition of academic excellence.