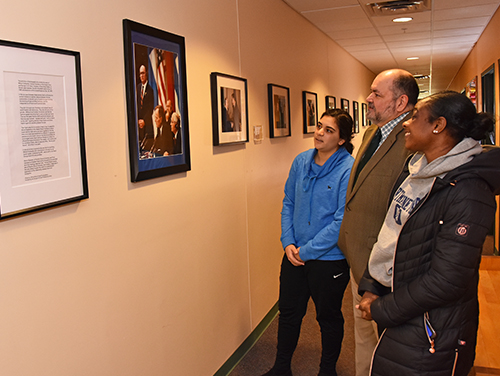 Today, Franklin Pierce University honors one of its most loyal supporters, President George H.W. Bush.  The photo exhibition titled “Empires Fall” will re-open at the Marlin Fitzwater Center for Communication in memory of the late president.

The exhibition of photographs, taken by White House photographers including Fitzwater Center Advisory Board member David Valdez, documents the public relationship and private friendship between President George H.W. Bush and Mikhail Gorbachev, General Secretary of the Soviet Union, in the two years between the fall of the Berlin wall on Nov. 9,1989 and the dissolution of the Soviet Empire on Dec. 24, 1991.

Their relationship and friendship, based in trust, shared a world view of freedom and democracy. Without much fanfare, Gorbachev said that the German people should be free to work out their own future, a signal that the U.S.S.R. would not intervene. Bush responded, “I will not dance on the wall,” indicating that the United States would be a helpful agent for rebuilding Eastern Europe.

Bush then asked for Gorbachev’s help in Iraq and for shared leadership in the Madrid Peace Conference, where Israel and the Arab nations sat down together for the first time since the establishment of Israel. Bush offered U.S. economic assistance to the Soviet Union for the first time at Malta; he encouraged Vaclav Havel and Lech Walesa and others. Bush offered the hope of America to the leaders of all nations; and he told Boris Yeltsin after he assumed office, “We are your friend.”

“All of this in two years,” noted Marlin Fitzwater, Franklin Pierce University Trustee and former U.S. Press Secretary, who was at Bush’s side.

The association between Franklin Pierce University and President Bush began when he and his wife, Barbara Pierce Bush, a descendant of the country’s 14th President Franklin Pierce, spoke at a 1998 dinner in Washington, D.C., raising over a quarter of a million dollars for the new Marlin Fitzwater Center for Communication, named after University Trustee Marlin Fitzwater.

Four years later, President Bush drove down from his Maine home to speak at the dedication of the Fitzwater Center, one of the region’s most technologically advanced educational facilities, noting that

“Just as the press has been a vital part of this successful experiment in self-governance, …  so too is the free press one of the foundational pillars on which the students who pass through these halls, will build a new American century of hope, opportunity and freedom for generations to come.”

Kristen Nevious, Director of the Marlin Fitzwater Center for Communication, stated, “The Fitzwater Center strives to educate leaders of conscience in public communication, and President George H.W. Bush has long been a selfless inspiration for all of us. We are the better for having known him.”

The exhibit “Empires Fall” is open to the public weekdays at the Marlin Fitzwater Center for Communication on the Franklin Pierce University Rindge campus between 8:30 a.m. and 4:30 p.m.