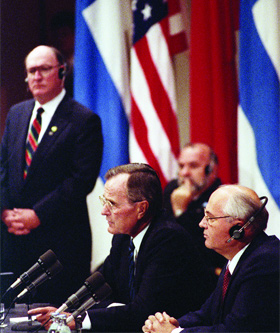 Gorbachev, General Secretary of the Soviet Union, and George H.W. Bush, President of the United States, in the two years between the fall of the Berlin wall on Nov. 9. 1989 and the dissolution of the Soviet Empire on Dec. 24, 1991. Marlin Fitzwater, of Franklin Pierce University, was Press Secretary to President Bush during this period and attended all of the meetings depicted in the exhibit, which will open to the public on Tuesday, July 27th from 4:30 p.m. to 6:30 p.m. in the Marlin Fitzwater Center for Communication on the Franklin Pierce University Rindge campus. Mr. Fitzwater will attend the opening event and will be available for interviews. Marlin Fitzwater was White House Press Secretary for six years under presidents Ronald Reagan and George H. W. Bush, making him one of the longest-serving press secretaries in history. He was born on a farm in Salina, Kansas, graduated from Kansas State University in 1965 with a degree in journalism, and served in the United States Air Force. Fitzwater worked as a reporter, then served at various Federal agencies, including the U.S. Department of Transportation and the Environmental Protection Agency and served as Deputy Assistant Secretary for Public affairs at the Department of the Treasury from 1981 to 1982. Fitzwater joined the White House in 1983, where he served until 1993. The Marlin Fitzwater Center for Communication at Franklin Pierce University was established in 2002 as an academic institute dedicated to preparing young men and women to be politically-engaged Leaders of Conscience in their studies and professions. The Fitzwater Center was named for its primary benefactor, Marlin Fitzwater, who stands alone as the only White House press secretary to have been appointed by two presidents (Ronald Reagan and George H.W. Bush). Fitzwater also serves on the University's Board of Trustees. Since its founding, the Fitzwater Center has gained a national reputation for the caliber of student journalists who hone their skills through its hands-on learning and mentoring programs. The Center has been recognized by the New England Board of Higher Education for successfully preparing students to succeed as journalists, critical thinkers, and contributors to a healthy democracy. The Center received the 2009 New Hampshire State Merit Award in the New England Board of Higher Education's annual Excellence Awards program.