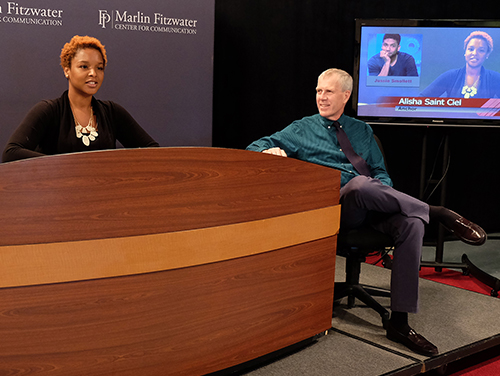 Richard T. Griffiths shared a lifetime of journalism experience and perspective with students in the Marlin Fitzwater Center for Communication during his week of residency on the Rindge campus as a Visiting Fitzwater Fellow. Griffiths, retired Vice-President and Senior Editorial Director for CNN, delivered the public Medallion Lecture on Thursday, April 18 and received the 2019 Fitzwater Medallion for Leadership in Public Communication.

Griffiths was responsible for editorial oversight of CNN’s investigative journalism as well as the network’s fact-checking operations during the three most recent presidential elections.  He covered the events of the Arab Spring, and led the network’s coverage of the 9/11 attacks. His special reports contributed critical information to the public conversation on an extraordinarily wide range of issues, from emergency room care for children to the decline of civility in American society.

“The Marlin Fitzwater Center for Communication strives to engage intellects, challenge perspectives and help students find their voices in the public discourse.  Mission accomplished,” said Dr. Kristen Nevious, Director of the Fitzwater Center. “Richard Griffith’s generous investment in our students over four intense days in the classrooms and studios - in front of and behind the camera, over a meal, in countless hallway conversations - is one of the finest examples of the type of professional collaboration that has made the Fitzwater Center a success.”

Griffiths offered hard-won insights into investigative reporting, editorial decision-making and journalism ethics. In one class discussion he called “Not So Finest Hours,” he led students in dissecting lessons learned from some of CNN’s biggest “mistakes” under his watch. He engaged students in applying CNN’s own rules for testing the reliability of sources to high-stakes media events over the last decade, including the 2011 shooting of Congresswoman Gabby Gifford, and the Sandy Hook school shooting in 2012.

In his Medallion Lecture, titled “The Global Battle for Journalism’s Soul,” Griffiths spoke about factors contributing to a troubling decline in the global public’s trust in the media, and what must be done to restore faith in a free press. “The news media must make clear our editorial values and standards, and the difference between reporting, analysis, and opinion. We must be aggressively transparent about our editorial processes, acknowledge mistakes and be clear about what we’re doing to avoid repeating them,” Griffiths stated. “We have to get out of big cities and into small towns and rural areas, and listen more. And we have to have the courage to call out falsehoods and show the public where to go to get the data to refute them.”

Later at the Fitzwater Center Honors ceremony, Griffiths and a select group of others were honored with Fitzwater Medallions for their contributions to the field of journalism. Luke Tracy ’19 and Sarah Daley ’19 were recognized for their leadership in Fitzwater Center programs; Robert Patterson ’69, former member of the FPU Board of Trustees, was honored for his visionary application of satellite technology to global media operations; Shawn Kelly of Oyster River High School was honored as a journalism educator.