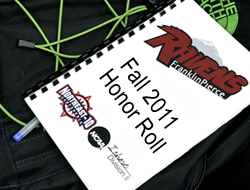 On the men's side, the baseball team led the way for all teams with 32 of its student-athletes being named to the honor roll. The women's team with the highest number of honorees was the softball squad, which posted 16 of its members on the academic list.

To be eligible for selection to the Northeast-10 Commissioner's Honor Roll, a student-athlete must have met and/or exceeded a minimum 3.0 semester grade point average (on a 4.0 scale) during the fall '11 semester.

For a complete list of Franklin Pierce student-athletes who received a spot on the Honor Roll, please visit the following web address http://static.psbin.com/j/6/333m8smpkqb148/Franklin_Pierce.pdf