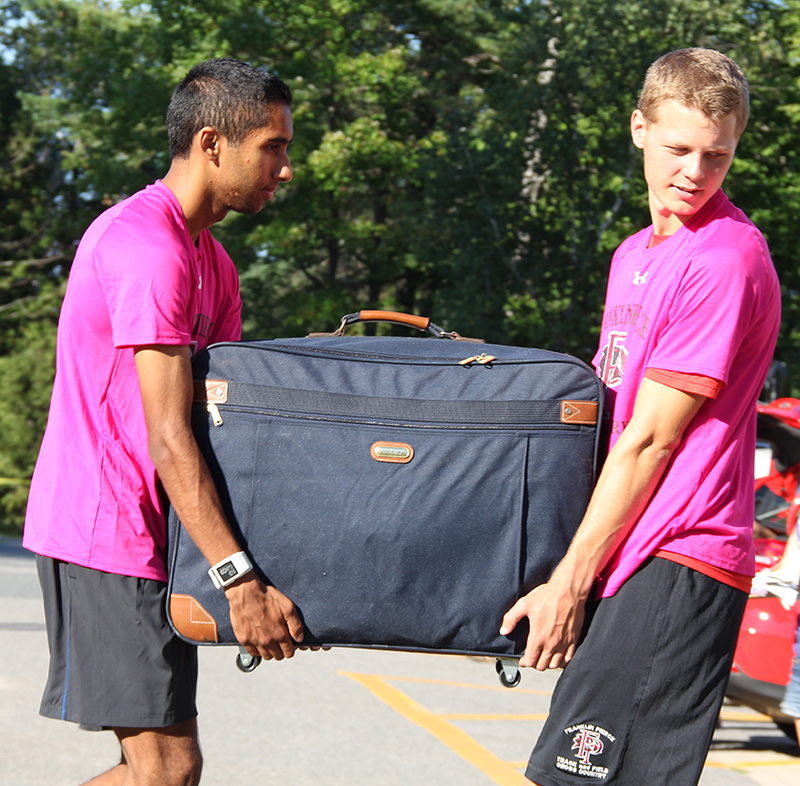 This past Saturday crowds of parents and students descended upon Franklin Pierce University’s Rindge campus where they were greeted by hundreds of faculty, staff and students who helped haul their belongings into their new homes during the university’s annual move-in day.

Franklin Pierce welcomed 676 new students, including freshmen and transfers, making it the largest incoming class in the university’s 54-year history. The incoming class comes from 19 states, with Massachusetts and New Hampshire as the most represented, and with students coming from as far away as California, Hawaii, Colorado and Texas. Twelve international students from seven countries are also among the new class that will call Rindge, New Hampshire home.

In addition to a new class, Franklin Pierce’s new president, Dr. Kim Mooney, was on hand throughout the day meeting the new students and helping them move into their dorms.  As an alumna of Franklin Pierce, President Mooney brings a unique perspective to move-in day as she was once in the shoes of the incoming class when she moved into her freshman dorm in 1979.

“There’s so much anticipation and also anxiety that goes along with move-in day for new students and their families,” Mooney said. “There’s nothing like having an army of people here with their smiling faces and their helping hands to greet our new students as they arrive on campus. It’s a great example of the caring community that is Franklin Pierce.”

The class of 2020 brings a variety of interests and talents to Franklin Pierce including a competitive horseback rider, a member of Police Explorers, a student who represented the United States at the Goodwill Games in Holland, a former Miss New Bedford’s Outstanding Teen, a industrious student who started their own landscaping business and a student who volunteered their time as a bone marrow transplant recruiter.

Health Sciences, which is Franklin Pierce’s fastest growing major, is the most popular field of study among the incoming class. Criminal Justice and Sports and Recreation Management round out the top three majors of the class of 2020.

Orientation activities are scheduled throughout the first week of classes for the incoming students that will provide both social opportunities for students to meet their new classmates as well as informational sessions that will help them acclimate to college life. Classes for the fall semester begin Tuesday, August 30th.