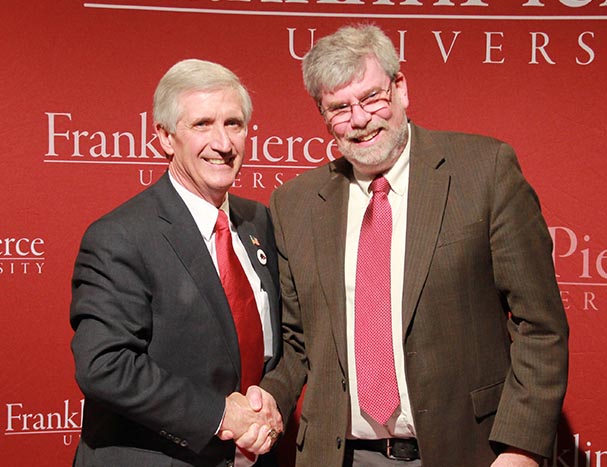 Franklin Pierce University and the Rindge Faculty Federation (RFF) have agreed to a new four-year collective bargaining agreement (CBA). The RFF ratified the deal on Tuesday in “a landslide,” according to faculty representatives. The new CBA was then approved by the University’s board of trustees.

President Andrew H. Card, Jr., and Douglas Ley, faculty union president and Associate Professor of History at Franklin Pierce, were both on hand Wednesday afternoon to sign the agreement at a press conference on the Rindge campus.

“We are excited to have reached this important agreement with our faculty. I appreciate the hard work and collaboration of everyone involved,” said Card. “This new contract keeps the interests of our students and the quality of their education at the forefront, which is the outcome that will serve this University well.”

This is the first comprehensive review of the CBA in a number of years and the entire contract was revised to meet university goals. The negotiations were a cooperative effort by union faculty and senior administrators to develop an agreement that would be in the best interest of the university’s future and provide more opportunities for students.

RFF President Douglass Ley believes that the new deal has turned the page on past negotiations and created a foundation of mutual trust between the two sides.

“These negotiations were arduous, but unlike prior negotiations, they were not rancorous,” said Ley. “I think both sides concluded pretty early on that it was in our best interest to reach an agreement that was beneficial to the University as a whole.”