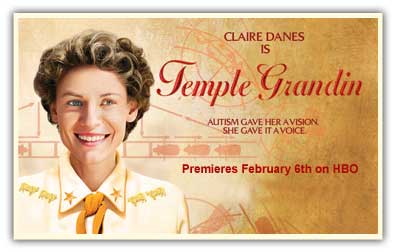 RINDGE, NH - Franklin Pierce alumna Temple Grandin '70 is the subject of a semi-autobiographical HBO movie that will show how she overcame the limits associated with autism to become one of the world's foremost experts in autism studies and livestock welfare. Filming began in August 2008 and stars Claire Danes as Dr. Grandin. The scenes depicting Grandin's college years at Franklin Pierce College (now University) were shot on the campus of Southwestern University in Texas.

Grandin returned to Franklin Pierce University in October 2008 for Alumni and Reunion Weekend, where she received the University's Leader of Conscience Award for her contributions to the field of neuroscience and animal welfare. In an interview during her visit, she reminisced on what Franklin Pierce was like back then. “I remember Mr. Dion, the math teacher. He really helped me. I had lots of problems with math and I would come up to Mr. Dion’s office after class and he would do the whole lecture over again with me.  I am really, really grateful to Mr. Dion for that. You know, I had some good teachers here.”

After earning her B.A. in Psychology at Franklin Pierce, Grandin went on to a big university, Arizona State. “I saw 500 students in freshman English,” said Grandlin. “I thought “I’m glad I wasn’t in that.”  My English class here (Franklin Pierce) had 20 students and one thing I’ve learned is that when you go to a small school you get a really good education.” Grandin went on to get her Ph.D. in Animal Science at the University of Illinois.

Today Grandin is a designer of livestock handling facilities and a Professor of Animal Science at Colorado State University. She has designed and consulted on facilities around the world that ease the stress and pain of livestock destined for meat plants.

In 2004, Grandin was honored by People for the Ethical Treatments of Animals (PETA) for her work. She was cited as a "visionary...whose improvements to animal-handling systems found in slaughterhouses have decreased the amount of fear and pain that animals experience in their final hours, and she is widely considered the world's leading expert on the welfare of cattle and pigs."

She has also authored over 300 articles in both scientific journals and livestock periodicals on animal handling, welfare, and facility design. She is the author of "Thinking in Pictures", "Livestock Handling and Transport," and "Genetics and the Behavior of Domestic Animals." Her book "Animals in Translation" was a New York Times best seller.

Learn more about Temple Grandin at her web site.
View a photo gallery of the HBO filming at Southwestern University.

Read the movie review in the New York Times.