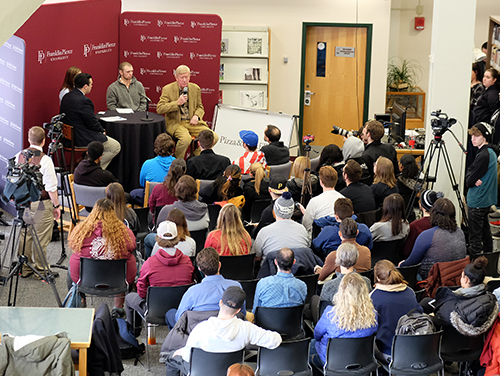 Politics FitzU, the Pierce Media Group’s political reporting unit, kicked off its “Pizza and Politics” series on Thursday, February 21 with a visit from former Massachusetts Governor William Weld. The series provides informal opportunities for the Franklin Pierce community to talk directly with presidential candidates and hopefuls throughout the 2020 primary season. Dr. Kristen Nevious, Director of the Marlin Fitzwater Center for Communication, welcomed the audience of students, faculty, staff and media saying, “We are privileged that the road to the White House runs right through the Franklin Pierce campus.”

Student host Matthew Dresselhouse ’19 introduced Governor Weld, who has established an exploratory committee to consider running for the Republican nomination. Governor Weld described himself as an outdoorsman with a long history of visiting and loving New Hampshire. He started with a story about spending a Saturday afternoon as a law student doing menial volunteer work in the hot sun for a local state representative, a favor that paid off 4 years later with an opportunity to work on the Justice Department’s Watergate inquiry in Washington. “My advice to all of you: do little things well and someone will notice.”

Weld offered his thoughts on the high cost of education, college debt, and the need to train displaced workers as technology changes the nature of work. “College affordability is the real national emergency,” he said. “In 15 years, 25% of jobs in the U.S. will not be in their current form. Displaced workers will need the equivalent of two years of post-secondary education. We’ll need something like a GI bill for displaced workers so they can get the training they need for the work that’s available.

“The cost of college should be way high on the national agenda,” he said. “We need to repeal the existing provision of federal law that says you can’t renegotiate college debt.”

Weld was asked what his proudest moment has been. He pointed to the bipartisan work he did as Governor of Massachusetts to improve lagging student outcomes through “high stakes testing.” By promising to invest $7 billion in education, accumulated through hard-fought spending reductions, he struck a deal with the teachers union in 1993. In 2018 he attended a ceremony with current Governor Charlie Baker to honor the Massachusetts Department of Education for being #1 in math and reading scores for 25 consecutive years.

Students asked why Weld was re-joining the Republican party now, after having joined Gary Johnson’s Libertarian ticket in the 2016 election. “I’ve been a Republican since I was 18, but I self-identified as a Libertarian since law school. When I joined Johnson’s ticket, I felt free at last – I’m fiscally conservative, but I’ve long disagreed with Republicans on social issues, including abortion, immigration and legalizing cannabis for medical use.”

Challenged by students to identify the first steps he would take to address climate change, Weld responded, “I’d rejoin the Paris Climate Accord. It’s a social justice issue – it’s not fair for what I call ‘northern countries’ who’ve had all the benefit of development to tell ‘southern countries’ they can’t have what we’ve had.

“You’re going to hear a lot from me about social justice. America can afford to be more generous.”