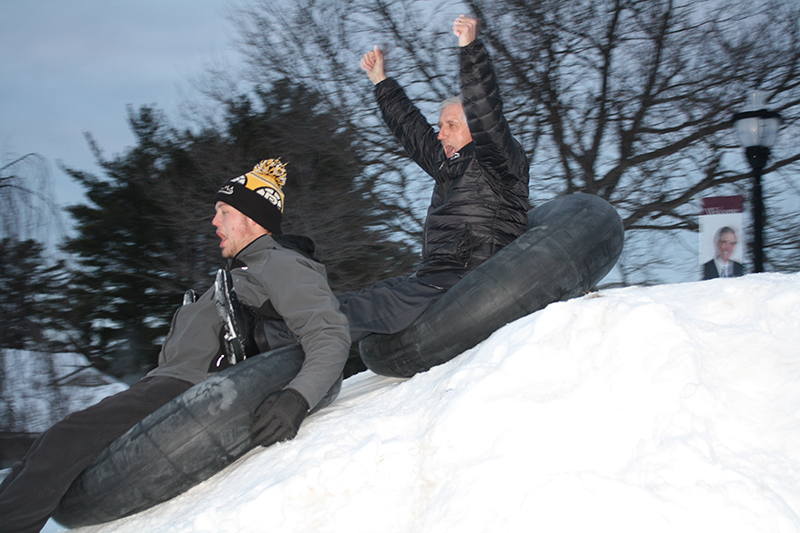 Rindge, NH:    As New Hampshire continues to work through a record-setting year for snow, students at Franklin Pierce University took time out yesterday evening to constructed a 12-foot snow ramp atop the University’s renowned front lawn that slopes down more than 100 yards to Pearly Pond.  Jumps and grind rails were also constructed for snowboarders who wanted to test their skills.  The event attracted over 100 students and a surprise appearance by Franklin Pierce University’s new president, Andy Card, who took time out from his busy schedule to join in the fun.   Donning a suit and tie, Andy Card found an available snow-tube and partnered with Franklin Pierce senior Chris Brewer ’15 on his inaugural run down the hill, much to the delight and roar of approval from students.  Andy Card made 4 runs in all, each receiving a tremendous ovation.

“It says something really special to these students,” says Doug Carty, Director of Campus Recreation and the organizer of the event, “for a busy president like ours to take time out to meet the students on their home turf, so to speak. Not every university president can do that.  It was a very special moment for our campus.”

A large bonfire kept bystanders warm as they watched, while smores were served in large numbers. For himself, Andy Card described snow tubing as “exhilarating, fun, and educational.” Shortly thereafter, he informed his relieved staffers that neither he nor his suit suffered any injuries while snow tubing.