The Australian Native found her academic and athletic home at Pierce

Jemma Thacker’s first visit to New England was the day she stepped onto the College at Rindge campus of Franklin Pierce University. She began her Raven career during the spring semester, welcomed by the frigid 30 degree temperatures of late January.

The winter temps that greeted the newest Raven Women’s Basketball player as she drove up University Drive in the middle of the night were a far cry from the 120 degrees Jemma had left down under in her native Nairne, Australia—just outside of Adelaide—a mere 24 hours earlier.

But winter would be inescapable from that point forward for Jemma, except for a few warm days when she arrives on campus in the fall and departs in the spring, because New Hampshire and Australia are in opposite hemispheres and she draws a cold straw both ways.

Making it all fit

It was initially a combination of size, location, academics, and of course, the basketball program that drew Jemma to Pierce, who was recruited to play for Raven Nation.

“I still feel the same,” Jemma said. “I like the professors, the classes, the people here, my teammates, my coach. I still feel like everything just kind of fits.”

Making everything fit is not easy for a student athlete who is majoring in Psychology with two minors in Criminal Justice and Forensic Psychology, participating in three honor societies, tutoring two psychology classes, working as a research and teaching assistant, and attending or presenting at the New England Psychological Association conference, the New England Conference for Teachers of Psychology, and the New Hampshire Psychological Association conference.

Next semester, Jemma will add an internship and a thesis to the mix (she is only required to complete one, but she has chosen to do both). It takes a supportive network to help a student with so many demands on her time to reach her potential and succeed, but Jemma asserts that she has the care that she needs.

“That's one of the beauties of [Pierce],” Jemma said, “A lot of our faculty are very understanding of our commitments whether it's sport, or work and internships. It can be challenging, but I think it's definitely doable. If you are passionate about both, and you really want to push through both, then it's not difficult to find the time and make things work.”

The epitome of a student-athlete 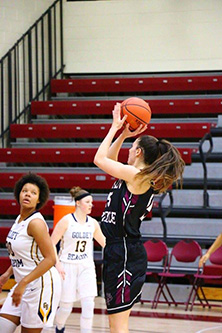 Basketball is only one piece of Jemma’s large time management puzzle, but it provides the backbone to her schedule. Pre-season begins from the moment the team steps on campus in the fall until the season officially kicks off in October. Depending on the team’s success, the season can run through the end of April, with post-season wrapping up just before finals week.

During the Raven’s 2016-17 season, the 5’11” guard was ranked second on the team in scoring and steals per game, with the seventh-highest three-point field goal percentage in the NE10 Conference.

“Jemma is one of hardest workers, if not the hardest worker, I have coached in more than 14 years in the profession,” said Raven Women’s Head Basketball Coach Jen Wedo. “She is the epitome of a student-athlete because of her focus on and off the court. Her general passion for the school and basketball are one of a kind and her future is bright. I look forward to coaching [Jemma] for her senior year and seeing the amazing things she will accomplish this year and in the future,” Coach Wedo added.

Family on and off the court

While other players connect and recharge with their families during breaks and holidays, Jemma only goes home once per year. It’s not easy to be so far from home, but the friends Jemma has made at Pierce, including her teammates, have become family and have extended the comfort of their own families to Jemma.

“I'm very close to my teammates’ parents,” Jemma says. “I call some of them ‘mom and dad’ and call their houses ‘home.’”

But second families don’t always lessen the sting when she has to miss important goings-on back home like her sister’s eighteenth birthday party, prom and graduation, or her best friend’s wedding. Writing a letter or sending a recorded message of support back home is just not the same, Jemma said with a sigh.

Especially when someone is sick. Jemma’s mom was diagnosed with cancer after her sophomore year, and while she was home for the diagnosis, Jemma hasn’t always been able to be by her mom’s side as she bravely and successfully battled through radiotherapy and surgeries.

Luckily, Jemma is supported stateside by the Pierce community.

“It's like a family community here. I know I have good relationships with my teachers, my coaches, other athletes, my teammates. Even maintenance people and the cafeteria ladies. Everybody knows everyone on a first name basis, and I have good relationships with everybody. We have really great support at our home games. It just feels like a real community and if somebody's struggling with something, I think there's definitely always someone there.”

Beyond the court and the classroom 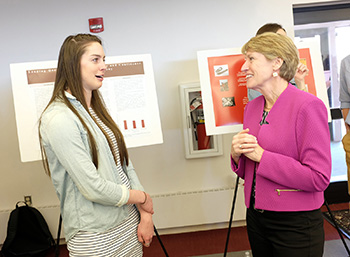 One faculty member who has given particular academic care to Jemma is Dr. Jennie Brown, Associate Professor of Psychology, who took Jemma under her wing early in her college career and presented her with opportunities to participate in research and expand her experience outside the classroom.

“Jemma is a huge asset to the psychology research lab and to our research,” said Dr. Brown. “She is very hardworking and pays close attention to detail. She retains what she learns in her classes and applies this knowledge to her work with me. In addition to her research skills and superb work ethic, she is kind and humorous – making her a fun person to work with. She is also an excellent trainer for newer research assistants in the lab.”

Jemma also participates in the annual Academic Showcase, a day-long celebration of the best creative and scholarly work of the University’s students and faculty. But as much as Jemma is involved in, she acknowledges that there is much more available at Pierce that she simply doesn’t have time in her jam-packed schedule to join.

“The experience here at Franklin Pierce and being involved in so much on campus provides a great opportunity and experience for life after college. I think there’s something for everyone and opportunities to be involved for the people who want to pursue them,” Jemma said.

What does life look like for Jemma after she leaves the nest? She would love to continue to play basketball internationally, maybe in Spain. Or perhaps travel to Greece to visit some friends who are former Men’s Raven ballers. “I’m very independent. I’m a free bird. I will just up and move to Europe, or something, after this. I don’t want to get stagnant.”

Fortunately, “stagnant” would probably be the last word anyone would use to describe Jemma Thacker.

Jemma’s final season as a Raven kicks off on October 15 and Raven Nation will be watching number 15. Keep an eye on Raven Athletics to catch one of her games and keep up on her success throughout the season, or learn more about Raven Women’s Basketball . You can also learn more about the psychology major and the Criminal Justice and Forensic Psychology minors at Franklin Pierce.