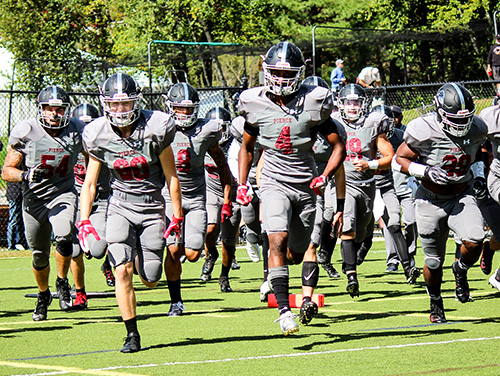 Within the past week, Franklin Pierce University has taken on two new coaches as additions to the Athletics Department. One of them is Russell Gaskamp, who will be coaching the Franklin Pierce Football team, and the other is Ruben Resendes, who will coach the Men's Soccer team. Below are the articles for each new coach.

Franklin Pierce University Director of Athletics Rachel Burleson has announced Russell Gaskamp has been named as the next head coach of the University’s football program. Gaskamp will be the program’s third coach overall and will be the first to coach the team at the Division II level, as the Ravens join the Northeast-10 Conference in the fall of 2019. He will replace Rashad Watson, who announced his resignation earlier this week.

“I am extremely honored and blessed to be trusted by Rachel Burleson and the administration of Franklin Pierce to lead the Ravens football team into their inaugural season at the NCAA Division II level,” said Gaskamp. “My initial goal is to get our team to be competitive at the conference level as quickly as possible, while creating a culture for long-term success.”

Rindge will be the second collegiate head coaching stop for Gaskamp, who comes to Franklin Pierce after spending seven years leading the football program at Oklahoma Panhandle State University, where he also earned the title of Associate Athletic Director. Over 73 games at the helm of the Aggies, he posted a 35-38 record (.479 winning percentage). OPSU played at the NCAA Division II level for the first five seasons of Gaskamp’s tenure, including two seasons in the highly-competitive Lone Star Conference, before the institution elected to reclassify to the NAIA level for 2017.

“We are extremely fortunate to have somebody with coach Gaskamp’s level of experience come to our attention at this point in time,” said Burleson. “To head into the world of Division II football with a coach who already has significant coaching experience at the same level can only serve to elevate our program. We look forward to what ‘Coach Gas’ can accomplish in Rindge.”

As an undergraduate, Gaskamp was rostered for five years (1994-98) at the University of Texas, where he was a member of Southwest Conference championship teams in 1994 and 1995, as well as the Big 12 title-winning squad in 1996. He lettered for both the 1996 team and the 1998 incarnation, which would go on to win the Cotton Bowl. In 1998, Gaskamp was the starting center on the Longhorns offensive line which helped clear the way for Ricky Williams in his Heisman Trophy season.

“The members of our football team will quickly understand there is a process to reach our goals; that process includes being extremely competitive in the classroom, being active ambassadors for the University in the community, and being tenacious competitors on the football field,” added Gaskamp. “My wife and I are very much looking forward to joining the FPU family.”

Originally from Weatherford, Okla., and currently hailing from Goodwell, Okla., Gaskamp is a 1999 graduate of the University of Texas, with a bachelor’s degree in management. He later added a master’s degree in educational leadership from Sam Houston State University in 2005.

Gaskamp will begin his duties with the Ravens on Wednesday, Dec. 19. He will be the one to usher the program into Division II competition, and will continue to build on the work of Watson, who stated his resignation came as he sought to return to his family.

“After careful consideration, I think it is best for me to reconnect with my family after two seasons away. It has been an honor to lead the Ravens into the Division II transition. I really will miss the players and the people I’ve worked with daily at Franklin Pierce; they exemplify excellence. I want to personally thank Dr. [Kim] Mooney [President] and Athletic Director Burleson for entrusting me with the program. Go Ravens!”

Watson leaves after two years at the helm of the Ravens, who marked his first collegiate head coaching stop. He guided the team to a 3-4 record in its final year of Collegiate Sprint Football League competition in 2017, and then steered the squad through a transitional campaign in 2018, which included games against sprint programs and junior varsity NCAA teams.

“We are grateful to coach Watson for his work the last two years and for guiding our transition to Division II; he has helped lay the groundwork for whatever heights our program is able to reach in the future,” said Burleson, who also worked with Watson previously at Missouri Southern State University. “I have known Rashad for seven years and continue to have the utmost respect for him as a coach and a person. I wish him and his family nothing but luck in the future.”

Franklin Pierce University Director of Athletics Rachel Burleson has announced Ruben Resendes has been named as the 11th head coach of the University’s men’s soccer program. The former Southern New Hampshire University standout will return to the Northeast-10 Conference to take on his second collegiate head coaching job, and his first at the Division II level.

“I would like to thank Director of Athletics Rachel Burleson and her incredible staff for entrusting me with the position of head men’s soccer coach at Franklin Pierce University,” said Resendes. “As someone who has a personal connection to the Northeast-10 Conference and NCAA Division II athletics, I understand the history and tradition of Franklin Pierce men’s soccer, which is consistently held to the highest of standards.”

Resendes will make his second collegiate head coaching stop, as he previously spent two seasons at the helm of Dean College, where he guided the Bulldogs through their final season at the junior college level in 2015 and into their exploratory year at the Division III level in 2016. At Dean, he posted a 33-3-0 record over 36 games, which included an undefeated regular season in 2015.

Most recently, Resendes spent the last two seasons as the top assistant coach at Division I University of Vermont, where he was responsible for all recruiting and practice planning, among other duties. The Catamounts captured the America East Conference regular-season title in 2017, for the third time in program history.

Prior to his stints at Dean and Vermont, Resendes picked up collegiate coaching experience as an assistant at his alma mater, SNHU (2014), as well as Division III Emmanuel College (2013), where he was the associate head coach. In addition to his experience at the college level, Resendes has served as the Director of Coaching and Youth Development for Blackwatch Burlington Premier Soccer Club in 2017 and 2018, and previously spent four years as an academy coach and scout in the New England Revolution system.

“We are excited and eager to welcome Ruben to the Franklin Pierce Athletics family,” said Burleson. “Throughout the search process, he distinguished himself as an up-and-coming coach who brings all the ingredients to return our program to national prominence. I am confident he is the right man to lead our team moving forward, and we look forward to seeing what he can accomplish.”

As an undergraduate, Resendes was a four-year standout at fellow NE10 member SNHU from 2009 through 2012 (bio), a time when the Penmen and Ravens routinely clashed as two of the region’s premier programs. He was named the NE10 Rookie of the Year in 2009, and followed up with three straight All-NE10 selections in his sophomore through senior seasons, including First Team nods in 2011 and 2012. Resendes was also a three-time All-Region selection during his career, including consensus First Team All-Region honors as a senior, when he started all 23 games in the midfield and capped his career with an All-America Second Team selection as well.

During his career, the Penmen qualified for the NCAA Championship in all four seasons and advanced to the national quarterfinal on three occasions. Resendes went on to play one season professionally in Iceland’s top division with UMF Tindastoll.

“The objective of our program will be to achieve competitive excellence, both in the Conference and on the national stage,” added Resendes. “We will relentlessly commit to attracting high-level student-athletes to the University, while consistently developing a strong cultural identity within our program.”

Originally from Fall River, Mass., Resendes is a 2013 graduate of Southern New Hampshire University, with a degree in sport management. He will officially join the Franklin Pierce staff on Jan. 3.