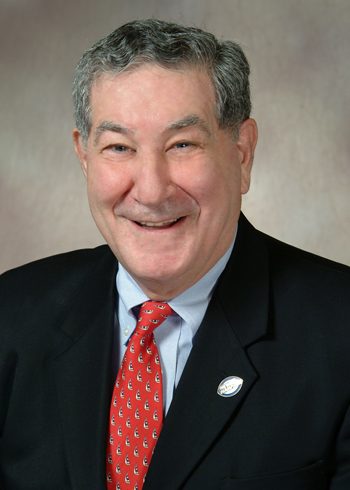 "We are pleased to recognize Walter’s generous dedication to public service and higher education leadership in the University’s leader of conscience tradition," says President James F. Birge. "As the longest-serving president in the University’s history, he has led with integrity and character, brought national prominence to the University and has been a stalwart of the needs of southwestern New Hampshire and the entire Granite State for decades." A staunch supporter of Franklin Pierce, Governor Peterson continues to serve the University as President Emeritus.

The award, presented at the annual commencement exercises, is intended to acknowledge and to honor an individual for his or her extraordinary commitment to public service, selfless contributions to higher education, sense of humor and high moral character—all characteristics of the award’s namesake. The award medallion is engraved with a likeness of Governor Peterson and is presented to the recipient along with a $2,500 cash award. Additionally, a $2,500 contribution is made in honor of the recipient to his or her charity of choice.

Sen. Lou D'Allesandro will be the first recipient of this award presented at the University’s May 14th commencement. D’Allesandro is serving his seventh term representing District 20 in the New Hampshire Senate and has been a familiar face in New Hampshire government for many years. He served the people of New Hampshire for three terms as an executive councilor and for two terms as a member of the New Hampshire House of Representatives.

In addition to his career in public service, the senator has enjoyed professional success in the field of education. He holds an honorary doctorate from Franklin Pierce University as well as honorary degrees from Daniel Webster College and the New Hampshire Institute of Art. He is a graduate of the University of New Hampshire and Rivier College. He won the Caroline Gross Fellowship to attend the program for Senior Executives in State and Local Governments at Harvard University and two other post-graduate programs there.

D’Allesandro has also served Franklin Pierce University in a number of capacities over several years including Vice President for Continuing Education, Special Programs Counsel as well as teaching adjunct courses for many years.

An active member of the local community, D'Allesandro has served in many civic capacities, including as a volunteer with the National Council on Alcoholism and as a member of the Manchester Board of School Committee. He is a member of The National Football Foundation and College Hall of Fame Inc., and is a director of the New Hampshire Hockey Hall of Fame. Additionally, he currently serves as a member of the board of directors of Southern New Hampshire Services and Members First Credit Union and is the former vice chairman of the Federal Home Loan Bank of Boston's board of directors.

Most recently, D'Allesandro served as chairman of the New England Board of Higher Education, a congressionally authorized interstate compact designed to encourage cooperation among New England-based colleges and universities. Established in 1955, the organization and its programs are principally focused on the relationship between New England higher education and regional economic development.