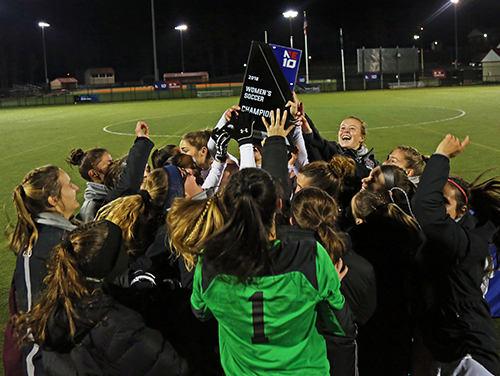 Sunday evening at Sodexo Field was a bit quieter in terms of offensive output than Friday night, but it was even louder in terms of import. The No. 8 nationally ranked Franklin Pierce University women's soccer team needed only a first-half tally from junior midfielder Gabi Pereira (Belo Horizonte, Brazil), but popped home two second-half insurance markers as well, as the Ravens returned to the top of the Northeast-10 Conference for the first time in over a decade. When all was said and done, top-seeded Franklin Pierce had a 3-0 victory over visiting sixth-seeded Assumption in the final of the NE10 Championship. It marked Franklin Pierce's eighth all-time NE10 title, which is a league record.

With the win, Franklin Pierce improves to 15-1-2, while Assumption falls to 11-7-2. With the victory, Franklin Pierce lays claim to the NE10's automatic berth in the NCAA Championship, which will begin next week. The Ravens are expected to be the top seed in the East Region and host the first and second rounds on Friday, Nov. 9 and Sunday, Nov. 11. The full NCAA Championship field will be announced via a selection show at ncaa.com at 6:30 p.m. on Monday.

At the conclusion of play, senior midfielder Nathalia Maria da Silva (Sao Paulo, Brazil) was named the Most Valuable Player of the NE10 Championship. She was joined on the All-Championship team by senior forward Bruna Tavares (Belo Horizonte, Brazil) and senior back Marta Turmo (Barcelona, Spain).

Franklin Pierce – which led the NE10 in goals-against average in the regular season – returned to its defensive prowess on Sunday evening. The Ravens smothered an Assumption attack which had toppled third-seeded Stonehill and second-seeded Southern New Hampshire earlier in the tournament. Franklin Pierce held Assumption to only five shot attempts in the game, only three of which were on goal. Meanwhile, the Ravens peppered Assumption junior goalkeeper Alexis Nason at the other end of the field, as the crimson and grey chalked up 26 shot attempts, including 14 shots on goal.

It all added up to a return to the top of the NE10 mountain for the Ravens. It was the 12th all-time appearance in the NE10 final for Franklin Pierce, which now holds an 8-4 record in such contests. The Ravens previously won seven straight league titles from 2000 through 2006, then dropped three consecutive title games from 2008 through 2010. Franklin Pierce returned to the final round a year ago, and fell on the road at Southern New Hampshire. This time around though, the Ravens finished the job on their own field.

Pereira chalked up the only goal the Ravens would need on the day in the 22nd minute, after Tavares sliced up the Assumption defense in the left-wing side of the penalty area. Tavares used some fancy footwork to shake her marking defender and fired a pass across the middle of the box. The pass found Pereira about 10 yards in front of the right post, and she would not miss from there. She quickly slotted her fifth goal of the season inside the right post to open the scoring.

The remainder of the first half went scoreless, and then Franklin Pierce started knocking on the door early in the second half, looking for an insurance marker. Tavares had an all-but empty net from seven yards out after tracking down a loose ball in the 56th minute, but an alert Assumption defender was able to use her body to keep the shot out of the net.

In the very next minute, freshman midfielder Jessica Magerman (Bellingham, Mass.) found some room to shoot from 20 yards out in front of the right post. Her shot beat Nason high, but hit the crossbar and stayed out.

In the 61st minute, Tavares created her own shooting lane on the left side of the box, but had her shot saved by Nason. The rebound came to Magerman, but she put her follow-up attempt over the top of the net.

The persistence eventually paid off, in the 63rd minute, when the insurance tally finally came. On a corner kick from the right-wing side, Tavares played the ball short to Pereira, who immediately sent a service into the goalmouth. The cross hit the Assumption defense first, but ultimately pinballed to the feet of junior forward Sophie Cousineau (Milton, Mass.), who knocked it home for her sixth goal of the campaign.

The capper of the evening came in the 87th minute, when Tavares turned in a highlight-reel goal to create the 3-0 final. Tearing through the left-wing side of the midfield with the ball, she knocked the ball through the legs off the last defender, turned on the afterburners and raced to track it down near the top of the penalty area. With nobody else back to stop her, Tavares kept her shot low and slipped it past Nason and inside the right post to officially get the championship party started. It was Tavares' sixth goal of the season.

Freshman goalkeeper Casey Kane (Millis, Mass.) stopped all three shots on her goal to pick up the win (12-1-2) and post her eighth shutout of the season. Nason (10-7-2) piled up 10 saves against 13 shots on her way to All-Championship Team honors in the losing effort for Assumption. The Assumption defense was also credited with a team save against the Tavares shot in the 56th minute.