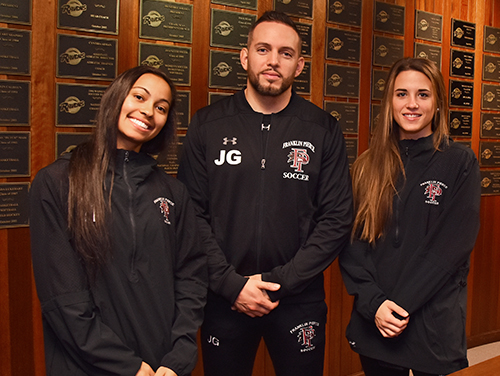 Turmo serves as a captain on the back line of what has been the NE10’s strongest defensive unit. The Ravens have allowed only 13 goals in 16 games thus far, which is good for an NE10-leading 0.79 goals-against average. Turmo also pushes forward on corner kicks and set pieces for the Ravens, and has collected five points on two goals and an assist. She has attempted 13 shots, including six on goal.

In his second season in Rindge, Garbar has guided the Ravens to the team’s seventh NE10 regular-season title, which marked their first first-place finish since 2008. Franklin Pierce’s 11-1-2 mark in league play this season marked the first time the team posted 10 wins in its NE10 schedule since 2010 (10-4-1). Through two seasons, Garbar has guided the Ravens to a 20-4-4 mark in NE10 play (.786 winning percentage).

Pereira is fourth on the team in scoring, and one of five Ravens to reach double digits in points, with 13. She has scored four goals and added five assists. Pereira has tallied 38 shots on the year, including 14 shots on goal, and put home two game-winning goals.

Tavares has 16 points on the season thus far, which is good enough for third on the team. Her six assists rank second on the squad, behind Marques, while she has tallied five goals along the way as well, including two game-winnings. Tavares has attempted 37 shots, including 23 on goal.

Like Turmo, Rodrigues is an integral member of the NE10’s strongest defensive unit. Rodrigues has started all 16 games on the back line for the Ravens in 2018. She has also recorded two shot attempts, including one shot on goal.

Kane has logged 1288:19 in front of the Franklin Pierce goal this fall, which represents more than 85% of the team’s minutes in net. She has posted the NE10’s best goals-against average, at 0.63, by allowing only nine goals in 14 games. Kane has posted a .786 save percentage, as she has collected 33 saves on the season. She has put together a 10-1-2 record with seven shutouts.

Magerman has made 14 starts in the midfield in her freshman campaign. She has one goal and one assist on the season, for three total points, and has attempted 17 shots along the way (12 on goal).

The top-seeded Ravens (13-1-2) return to the field on Friday in the semifinal round of the NE10 Championship against fourth-seeded Saint Rose. Game time is set for 4 p.m. at Sodexo Field.